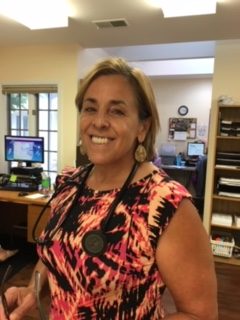 Christine A. Feathers was born in  Pennsylvania,  and spent most for her youth  on the family’s dairy farm where she learned to ride horses at the age of  five as well as how to care for livestock and hunt.

She worked for the Voice of America, a branch of the US Information Agency, where she recruited foreign-language broadcasters  while trying to get a foreign service posting herself.

In 1986 Feathers took off on a year-long solo backpacking trip across Asia and Southeast Asia, touring India, trekking in Nepal, and visiting Myanmar, Thailand, Hong Kong, Taiwan and mainland China.  While in  Nepal, Feathers volunteered at Mother Theresa’s  hospice for tuberculosis victims, which reinforced her decision  to pursue a career in nursing.

Back in the States, Feathers enrolled  at the University of Maryland at Baltimore,  where she worked her way through school waiting tables; for recreation, she rode mountain bikes, competing in several events.  It was during her studies that she met her husband, Peter Denzer, who owned a tavern in the Fells Point section of  Baltimore.

Feathers worked  as a Senior Clinical Nurse in the Oncology and Coronary Care units at Johns Hopkins Hospital.  As a Core Critical Care instructor she lectured ICU nurses on pulmonary and cardiovascular physiology and assessment, and taught Advanced Cardiac Life Support.

Feathers’ childhood passion for horses has reemerged, and she rides and trains her horses in jumping, dressage and eventing.  Since 2004 Feathers and Denzer have been renovating their old farm house and developing a small horse farm there.  Today, Feathers not only oversees  the health of her patients, but also the wellbeing of  a menagerie at home.